Survivor: Canada was the second season in KidA's Survivor Series. Casting began on February 18th, with the season beginning shortly after. 33 people applied, and 17 were cut from casting.

Unlike it's previous season, Survivor: Canada was not nominated for any TOGA awards. The season ran from February 24th to March 18th, when the winner was announced.

^1 Desmond played a hidden immunity idol on himself, negating 4 votes cast against him.

Survivor: Canada began with two tribes flying into the Canadian Wilderness on helicopters. Soon enough, alliances were made, and the game began. On Yukon, Leo got to work quickly, forming a 4-person alliance between himself, John, Gustavo, and Noah. Sheena also began to talk with Tyler one-on-one, trusting him the most. They formed an alliance between themselves, Gustavo, and Dan. On Manitoba, a trio formed between Trey, Desmond, and Mona - who felt that they were the strongest players on the tribe. Mona, however, formed another alliance with Chase, Mike, and Maks. James also became a part of the alliance, although he wasn't part of the core 4. At the immunity challenge, tribe members had to push members of the opposite tribe off a platform. Winning 5-2, Yukon claimed immunity, sending Manitoba to tribal council. Back at camp, Danny became a target due to his inactivity, as well as Chase. In a 4-2-1-1 vote, Manitoba eliminated Danny, feeling he was the weakest link.

For the second immunity challenge, the tribes had to submit a flag for their tribe. Yukon quickly got to work with John making the flag, while Manitoba members struggled to find someone who could make the flag. John soon had the flag submitted - it was very polished and professional, while Manitoba had still not submitted anything. In the end, no flag was submitted, and Manitoba was sent back to tribal council for the second time. Back at camp, the alliance of 5 (Maks, Mike, Mona, Chase, James) unified together, deciding to blindside an active and strong player, Trey. Desmond and Trey were on the outs, and decided to vote out Mike together, who was inactive. In a 5-2 vote, Trey was blindsided, leaving Desmond shocked and alone on his tribe.

At the immunity challenge, the survivors had to jump hurdles and hit a buzzer in order to answer Survivor trivia. John and Bryce competed hard in the challenge, earning a ton of points, while Manitoba fell behind, unable to match their speed. Back at Yukon's camp, Bryce and John set up a Final Two deal, based on the chemistry they had in the challenge. Bryce then set John out to create a Final Five alliance, since he knew the tribe better than Bryce. Meanwhile, at Manitoba, Desmond approached Maks, a member of the majority alliance, about the vote. Maks admitted that they were all voting out Desmond tonight. Before tribal council, James realized that their tribe would be pagonged if they kept the weak player, and it seemed that his vote was up in the air. At tribal, Desmond shocked everyone by plaing a hidden immunity idol. He voted Chase, while James voted for Mike. The other four votes were all by the majority alliance, for Desmond. Due to the tie, a re-vote occured. Maks and James voted for Mike, while Desmond and and Mona voted for Chase - forcing another tie. Due to this, it came down to the purple rock. Everyone on the tribe picked rocks, and in the end, Maks chose purple. The major alliance leader was sent packing.

For the immunity challenge, each tirbe had to get trends on a blog. By the end, the tribe with more trends would win immunity. Yukon took the lead early on, but Manitoba caught up quickly, with Desmond doing most of the work. At the end, it was extremely close, but Yukon managed to pull of a narrow win once again. Back at Yukon's camp, an alliance formed between Bryce, John, Gustavo, and Leo. Bryce felt confident that he was a strong contendor in challenges, and he hoped that this alliance was strong. At Manitoba's camp, Desmond was worried that he would be targeted once again. James felt secure, even after switching his vote, because he was strong in challenges. Finally, the tribe decided they needed to focus on strength, so they blindsided Mike in a 3-1-1 vote.

At the next immunity challenge, the tribes faced off in Rock, Paper, Scissors. The score became dead even, 2-2, with James and John fighting for that last point. Eventually, John won the last point, and Yukon claimed their 5th immunity. Back at Manitoba, a new alliance formed between Desmond and James, since they felt that they were the strongest players on the tribe. After the challenge, some cross-tribe activity was revealed. John made a deal with Desmond that if he voted James, he would keep Desmond around after the merge. Desmond was tempted, but in the end, changed his vote to an inactive, to make the honorable decision. In a 3-1 vote, Mona was sent home, and the majority alliance that once existed was nearly dead.

For the challenge, a list of 25 questions were posted relating to Canadian culture. The tribes had to submit a list of answers, and the tribe with the most correct answers would win. Yukon answered 2 questions incorrectly, while Manitoba answered 7 incorrectly - meaning, for the 6th time this season, Manitoba was headed back to tribal council. Honoring their alliance, James and Desmond decided it was Chase's time to go. In a 3-0 vote, Chase was eliminated, and only two Manitoba members remained.

At the next challenge, the castaways were told to drop their buffs. The two tribes were merged! At the immunity challenge, the castaways had to throw coconuts at a board, hoping to hit 4 targets in a row - vertically, diagonally, or horizontally. John won the challenge, and claimed individual immunity for the first time. Back at camp, alliances were explained. James and Desmond were aligned, the foursome of Bryce, John, Leo, and Gustavo was still strong, and the entire Yukon tribe was united against James and Desmond. Bryce had also begun to work more on his social game, talking with Sheena and some other Yukon members. Bryce and John also had a strategy session, where they planned to axe on of the Manitobans, and isolate the other - making him easier to control. Before tribal, Tyler accidentally chopped off his hand with a machete, and had to be medically evacuated from the game. At tribal, Yukon united, and voted off James in a 5-2-1-1, leaving Desmond as the only remaining Manitoba member.

At the next challenge, the castaways had to vote for a member of the tribe based on various tribes. Once they had given their personal opinion, they said who they thought had actually been the majority decision. By the end, the person with the most correct answers would win. John was voted as the majority in the catagories "Most Likely to Win", "Most Likely to be a Returning Player", and "Most Annoying". Bryce was voted "Most Likely to Backstab", Gustavo was voted "Nicest", Noah was voted "Least Deserving to Be Here", and Desmond was voted "Most Likely to be Voted Out Tonight". With 5 correct answers, John won immunity once again. Back at camp, Bryce realized that John was too threatening to take to Final 2. He wanted to target Noah, an easy inactive target. However, two of his allies, Leo and Gustavo, wanted to get rid of Desmond, the last Manitoba. In the end, Bryce agreed. Through this all, John had a plan of his own - to blindside Bryce. He felt Bryce would eventually flip on him, and was the only one who could beat him in the challenges. John rallied the votes, and in a 5-3 vote, Bryce was eliminated from the game.

At the challenge, the castaways played a Survivor version of "Hot Potato". After a heated battle, Desmond rose to be victorious, winning immunity. Back at camp, John knew he might be in trouble, and he wanted immunity. John struck a deal with Desmond - immunity for a hidden immunity idol. However, John then gave Desmond a fake hidden immunity idol, fooling him. In the end, with John immune, the vote switched to Dan. In a unanimous 6-1 vote, Dan was eliminated from the game.

For the Final 6 immunity challenge, each player was entered into a poll. They had to spam in order to receive immunity. Sheena received some votes based on her Tengaged popularity, but in the end, John dominated with 50% of the vote. Once again, he was immune. Before tribal, John was worried that his allies might turn on him and blindside Sheena. In order to ensure this didn't happen, he gave Sheena an idol. He then decided to target Gustavo, a social threat, who was considered the nicest player on the tribe. The entire tribe followed his lead, and Gustavo was voted off by a 5-0 vote, since Sheena played her idol, deflecting one vote cast against her.

The next immunity challenge was done in two parts. For the first part, a scrambled sentence was posted. The first two people to unscramble the sentence would move onto the second part. John and Desmond both completed the puzzle easily, and moved on. In the second phase, John and Desmond were suspended over water by three ropes. They were then asked trivia questions - for every question they got correct, they could chop their opponent's rope. Surprisingly, Desmond managed to win immunity. Back at camp, Leo had officially lost trust in John, who had blindsided most of his allies. John sensed this mistrust, and decided to take out Leo with Desmond. Knowing he was in trouble, Leo forced a tie by voting for Sheena, who had self-voted. The vote came out 2-2-1, but on the re-vote, John and Desmond ousted Leo 2-0, leaving Noah, Sheena, John, and Desmond as the Final 4.

For the final immunity challenge, the castaways had to collect cards and stack them to make a house of cards. The first person to stack 10 cards would win immunity. The challenge started off with John in a huge lead - he managed to maintain this lead all the way until the end, when he won immunity. With Noah and Sheena automatically self-voting, it was up to Desmond and John to decide who would become the 6th juror. In the end, John still wanted Sheena in the Final 2, so it was Noah that was sent packing in a 3-1 vote. For the final immunity challenge, John and Desmond faced off once again. They had to complete a very complex series of obstacles, remembering each step as they went. In the end, it was a close battle, but John pulled away in the end, leaving Desmond in the dust. He then won Final Immunity, and had the task of choosing to take either Desmond or Sheena to the Final 2. Knowing that Desmond was likable, and the last standing Manitoba, John chose to get rid of Desmond. The final two was now Sheena and John, and Final Tribal Council awaited. At Final Tribal, John was bashed for playing a very poor social game. Many people were bitter that John had betrayed them, and essentially run the game. Sheena was bashed for doing literally nothing, but people found her nicer than John, and easier to vote for. In the end, John realized that he wouldn't be able to get the votes to win. In a hugely controversial move, John told Leo that he would gift him for a jury vote, and Leo accepted the bribe, voting for John to win. This was the vote that broke the tie... in a 4-3 vote, John was crowned the Sole Survivor of Survivor: Canada. Leo has yet to receive a gift.

Credit to Sean for elimination table. Click to enlarge. 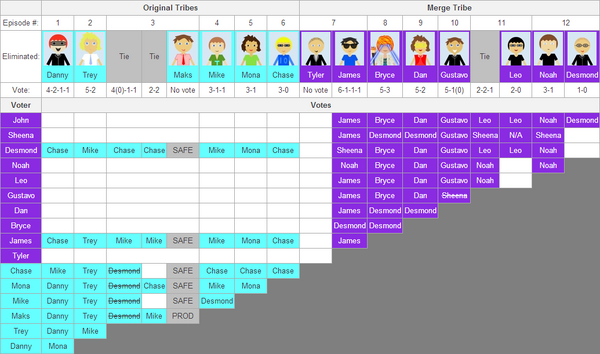 Bryce represented Canada in Survivor: Tuvalu, where he placed 3rd.

John represented Canada in Survivor: All-Stars, where he placed 17th.

Retrieved from "https://kidas-survivor.fandom.com/wiki/Survivor:_Canada?oldid=5922"
Community content is available under CC-BY-SA unless otherwise noted.